BIOGRAPHY
Caress Sahura, hailing from Maywood, a small suburb right outside of Chicago, like most young artists,  began honing her craft performing in church, school assemblies, local talent shows, in front of her family and friends and by listening to and studying some of her favorite artists like Patti Labelle, Whitney Houston, Sade, James Brown, Brandy, Toni Braxton, Jill Scott, Erykah Badu, Lauryn Hill, and Deniece Williams to name a few.

In the early stages of her career, she began working with various producers, which led her talent to be showcased in some of the hottest entertainment venues around the Chicagoland area.  She started gaining popularity, as a member of the up and coming soul duo, Syrenn, which allowed her to open for Virgin recording artist Dwele, Eric Roberson and others.  She later opened for Kindred The Family Soul and sung backgrounds for such artists as, Carl Thomas, Dwele, D'Wayne Wiggins of Toni Tony Tone', Alponso Hunter, and MC Lyte on several occasions.

Caress, a gifted writer and aspiring producer, believes she was born to sing! She stays committed to learning all facets of the music business and is constantly gaining experience in music and business management and spends many hours perfecting her various crafts.  She credits much of career ethics and growing success to her past manager and mentor, Chicago Fashion Designer, Larry James; Kahil El Zabar, Jazz extraordinaire; fellow musician and friend, Anthony Capers; and current manager, Ishmael White.

Currently, as a member of Aniba Hotep & The Sol Collective, she is not only one of the vocalists, she also displays her skills as an Emcee under the moniker, "Nile Disiac".  The many personalities of her ever evolving artistry, help to keep the image and sounds of the "Hotep Honeys" a cut above the rest, as she also serves as their hairstylist and MUA, helping to ensure the success, of Aniba Hotep & The Sol Collective, in bringing back the true essence of R&B/Soul music! 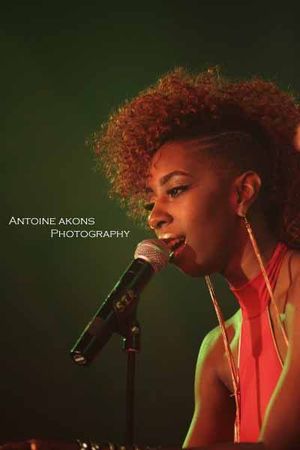